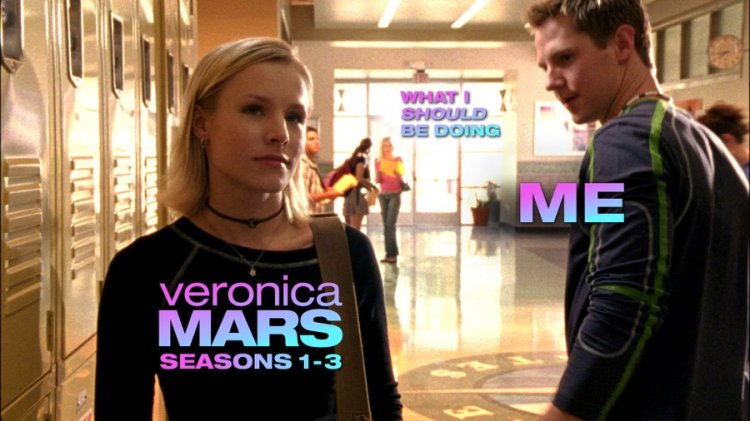 There’s a whole bone marrow transfusion thing happening at Mars Investigations and the Dean is involved. His wife essentially kidnaps her ex to force him to donate bone marrow to their dying child. It’s horrific, but also ends up alright.

Meanwhile, Veronica parades Weevil around like a special snow globe she got on vacation or something and then wrongfully accuses him of stealing the necklace Lily gave her. Long story short, it wasn’t him and it sucks that she just assumed it was. Also, I love Weevil and, though he has refuted this statement repeatedly, he can do no wrong.

Keith is kickin’ it with Harmony from a few episodes ago. She hired him to find out if her husband was cheating but, by the end of the episode, she is the confirmed cheater in the relationship. Get it together, Mars. You know better.

Speaking of cheating, literally everyone at Hearst is either cheating on exams, thinking about cheating on exams, or framing people cheating on exams. Look, I know it’s a drag, kids, but the only way to get through college is to do the work. I know it’s tough especially if you have to work two or three jobs and take out a gazillion dollars in loans that you will never, not ever, be able to pay back, but…you know what? Do what you gotta do.  Anywho, everyone is cheating, but the most interesting thing about this episode is, Parker gives V more information about her rapist, V tracks him down, and Lamb actually arrests the guy – I know. I, too, was shocked that he actually did something.

Logan comes to V for help. It absolutely could not be his buddy Mercer because…you guessed it. Logan was with the dude on the night in question. He won’t tell V where they were or why. Rather he insists that she trust him, which is hysterical.

Okay, y’all. This episode is basically everyone fighting. V is mad a Keith over his involvement with Harmony, who is married, BTW. V’s kickin’ it at Wallace’s when she’s asked to help find a missing dude named Sully. Sully is eventually found washed ashore, alive, but with a killer bump on the head and a bit of amnesia.

Logan’s friend Mercer swears he isn’t the rapist. Logan can prove it…but he won’t. Not right now, anyway. But in a minute he will. Turns out, he was in Tijuana with Mercer on the night of one of the attacks. He remembers because Mercer set a room on fire. So, maybe not a rapist, but a confirmed arsonist. Logan hangs out with the best people. Despite NOT being charged, they continue to detain Mercer.

Harmony and Keith have a whole thing about what’s moral and what isn’t. Vinnie, the best, shows up looking for Kendall Casablancas. She dead, tho. He is now blackmailing Keith using photos of he and Harmony. Their relationship is…not so harmonious now.

Liam Fitzpatrick makes an appearance and, for reasons unknown to anyone, picks V up in a bar.  No, literally. He picks her up off the ground and Vinnie takes pictures. I’m not sure why.

The really interesting/unnerving part of the episode comes at the end. V is kickin’ at the food court, listening to her voicemails, when she notices her food tastes weird. This has been my experience every time I’ve eaten at a food court. I still have nightmares about that slimey ass tofu they forced on me and LeRoux. She gets up to toss it, leaving her drink behind. She comes back, drinks her drink, only to discover she has once again been drugged.

V makes it to her car and has the wherewithal to sound off the alarm before she passes smooth out. A mysterious, shadowy figure is there, but then so is Logan. So, shadowy guy books it, but not before he cuts off some of V’s hair and leaves it lying beside her on the ground. What a creepshow.

308: Lord of the Pi’s. Or, alternatively, Anus Easter Eggs

Okay, so, frats and sororities are bonkers, basically. The Hearst Board of Trustees is considering shutting down the Greek system due to the ongoing rape investigation. During a party, a woman goes missing. The Dean is convinced something has happened to Selma Rose. But it hasn’t really. There’s some blackmail and an affair with the dog walker. You know, normal stuff.

Logan, in a move not very like him, is actually concerned about V after her attack. He has asked her to please let the rape case go. She’s like, “Nah.” So, he hires a bodyguard to follow her. Which she hates. They fight, make up, and then she ignores his calls. He’s sad about it.

The real standout moment was when Little Dick tells V about the anus Easter egg. You see, Chip Diller apparently had an Easter egg with Roman numerals on it in his butt. I’m just glad Dick is back. He’s a top three favorite character for me and it’s always so good to see him. Back to the butt egg. The Roman numerals signify a date. The Pi’s were mean to a girl who eventually died. V suspects the house full of feminist of planting the butt egg.

Oh, there is also suspicion that the Lilith House (that’s how you know it’s the feminist one) faked at least one of the rapes. I hope to heck it isn’t true. I mean, you have Sheriff Dingbat already not taking this seriously enough and making terrible, inappropriate jokes about it. Don’t give him a reason to take it less seriously. Puhlease.

What an insane block of episodes. This is super weird, but it has been an anus heavy week in the Lynx & LeRouxniverse. I’m not even going to try to explain myself.