This book is equal parts biography and autobiography. The author, O’Meara, works in the the horror film industry. She, too, struggles with some of the same issues that held Milicent Patrick back all those years ago. There are a few parallels in their life stories, which lend themselves well to the book. Mallory feels Milicent and you can tell when you read the book.

So, Milicent Patrick was a hard woman to track down. She was very keen on changing her name and, due to the nature of Hollywood at the time, people who worked behind the camera – in the art department, for instance – often went uncredited. Milicent began her Hollywood career at Disney. Yep. Disney. She helped bring Chernabog to life, which is dope. I love Fantasia and the Chernabog sequence is scary and awesome. Milicent Patrick did that!

Milicent was also a stunner, which is brought roughly one million times in the book. Both by the author and, more creepily, by people interviewing her when she was on a press tour. 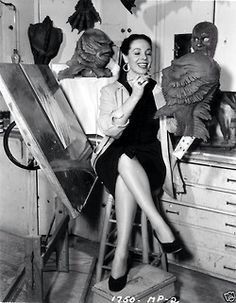 I mean, they aren’t wrong, but still.

Like, not even, “Oh, you’re pretty. Tell me about this monster you ‘didn’t’ make'”. Because she was never, ever allowed to publicly say she created the monster. It was closer to, and I am quoting directly here:

“Mil is a pretty gorgeous creature. She stands a neat five foot four in black mesh stockings, has raven-colored hair and a 41-inch bust line.”

The article goes on to say that stagehands and electricians had a hard time focusing on their work when she was around “For she does have a very enticing gait. The overall effect is that ‘plate full of jelly’ walk.”

First of all. What? Secondly, can you imagine anyone writing an article like this about a man?

“Sure, you’re a competent artist, but let’s hear more about that hang down.” I felt gross just typing that about an imaginary person.

So, Milicent put up with more than her fair share of shit just to go to work. She created the creature and, when it wast time to do the press tour for the movie, she was the obvious choice. Because the men in her department just didn’t have the bust line to pull it off. Nor did they create the monster.

So, off she went. She was hit. Everyone loved her, which infuriated her boss. You see, she worked for a giant man baby who was riddled with jealousy and insecurity. He black listed Milicent. That’s right. He fired the best artist on his team who was still giving him ALL the credit for creating the monster because his ego was bruised. What a jerk.

And that’s why almost no one has heard of Milicent Partick. Until now. Mallory O’Meara spent two years hunting for the lady behind the creature. Through her search for Milicent I like to think she learned a little bit about herself along the way.

You can get the book here!

Okay, I’m off to watch Creature from the Black Lagoon.
Byeeeeeeee.
Smoky Lynx

Lynx is an amateur knitter, a cinnamon enthusiasts, and is a obsessed with reality television. LeRoux is a former merkin weaver and accountant. They very recently became a published authors. We love books. We devour them. We write them. Our intention with this blog is to feature debut authors and books with a heavy focus on mysteries. There are a lot of great books out there and we hope to help you find them. View more posts